Burning our rivers: the water footprint of electricity

The availability and use of water is becoming more and more an important issue. Higher water temperatures and reduced river flows in Europe and the U.S. in recent years have resulted in reduced production of thermoelectric power plants, resulting in increased electricity prices. A new research report shows that in the U.S. thermoelectric energy (including coal, nuclear and natural gas) is the fastest growing use of freshwater resources in the country. But there are “waterfriendly” energy options: wind and PV solar technologies have by far the lowest wateruse factors.

Electricity -as we generate it today- depends heavily on access to free water. The impact to our freshwater resources is an external cost of electrical production. What the market considers “least cost” electricity is often the most water intensive. There are clearly some low water technologies and some water hogs. For example, wind and PV solar technologies have by far the lowest water-use factors and  hydropower, coal and nuclear have the largest water use factors.

It takes water to produce electricity.

As many Americans retreat to air-conditioned environments to get out of the heat, the flame increases under our limited freshwater resources. The elec-trical energy used to create our comfort zones requires massive withdrawals of water from our rivers, lakes and aquifers to cool down nuclear, coal and natural gas power plants. Some of this water is evaporated while the majority of this water is warmed up -causing thermal pollution- killing aquatic life, increasing toxic algae blooms and decreasing the sustainability of our water supplies.

Thermoelectric energy (including coal, nuclear and natural gas) is the fastest growing use of freshwater resources in the country. The U.S. Geological Survey (USGS) reports that 53% of all of the fresh, surface water withdrawn from the environment for human use in 2005 went to operating our thirsty electrical grid. Water behind dams is not included in USGS numbers. So, while all other sectors of society are reducing per capita water use and overall water diversion rates, the electrical industry is just getting started.

A newly released report by the River network ('Burning our rivers: The water footprint of electricity') is a snapshot of the current water impacts of electrical production and an introduction to the choices we face as a nation trying to sustain water and energy in a warming world. Many watersheds in the United States are already running out of water to burn -especially in the Southeast, the Great Lakes and in many parts of the West. Over the last several years, Georgia has experienced water stress because Georgia Power’s two nuclear plants require more water than all of the water consumed by residents of downtown Atlanta, Augusta and Savannah combined. In 2011, the Union of Concerned Scientists (UCS) reported that, in at least 120 vulnerable watersheds across the U.S., power plants are a factor contributing to water stress.

As a nation, we have “water-friendly” energy options. Energy efficiency and water conservation programs are crucial strategies that can help protect our waterways from the impacts of electricity production. Expanding the deployment of wind energy and photovoltaic (PV) solar power could vastly reduce water use conflicts in some regions. And we must change the technologies we use in existing power plants. Energy companies could conserve more water by modernizing “once-through” cooling systems than could be saved by all of our nation’s residential water conservation programs combined.

But instead of moving towards greater water efficiency and use of renewables, we are trending towards an electrical grid that uses more water and is less reliable. Without stronger federal water use standards, thermoelectric plants may continue using water-intensive cooling technologies. At the same time, water uncertainty is causing cities to explore new water sources such as desalinization, deeper wells and longer
pipelines -all of which would increase electrical use. Across the country “nonconventional” drilling for natural gas has raised concerns about water quality. In Colorado, natural gas “fracking” operations have actually begun to compete with farmers for water. The water footprint of coal-fired power plants will only increase with new carbon capture and sequestration (CCS) technologies.

Based on the available published water-use information, River Network calculates that in 2009 the water footprint (WF) of U.S. electricity was approximately 42 gallons per kilowatt hour (kWh) produced. (1 –US- gallon is 3.785 liters).

An average U.S. household’s monthly energy use (weighted by cooling technology and fuel mix) requires 40,654 gallons of water, or five times more than the direct residential water use of that same household. This estimate does not include major portions of the lifecycle of electrical production for which we could not find documentation. As the world’s largest electrical consumer, the U.S. needs to consider the sustainability of this course before investing in more water-intensive electrical infrastructure.

Today, our thirsty electric grid carries pollutants into our rivers and causes algae-blooms and fish kills. But, there are other paths. According to River Network calculations, eliminating ‘oncethrough’ cooling -by itself- could reduce the water footprint of thermoelectricity by more than 2/3rd. Increasing wind and PV solar energy to 40% of the grid would have a similar effect and reduce consumptive water use by 11%. Taken together, these two actions could reduce the water footprint of thermoelectricity by 82% and consumptive water use by 27%. While there are site-specific limitations and trade-offs to consider, our society stands to benefit from a wider discussion of how water saved in the energy sector might be used to meet future needs, grow food or restore fisheries and water quality. 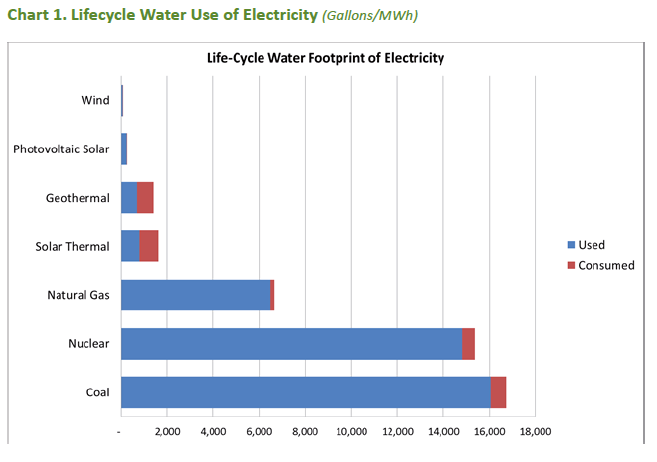 The magazine of the global anti-nuclear community. Twenty times a year, since 1978.