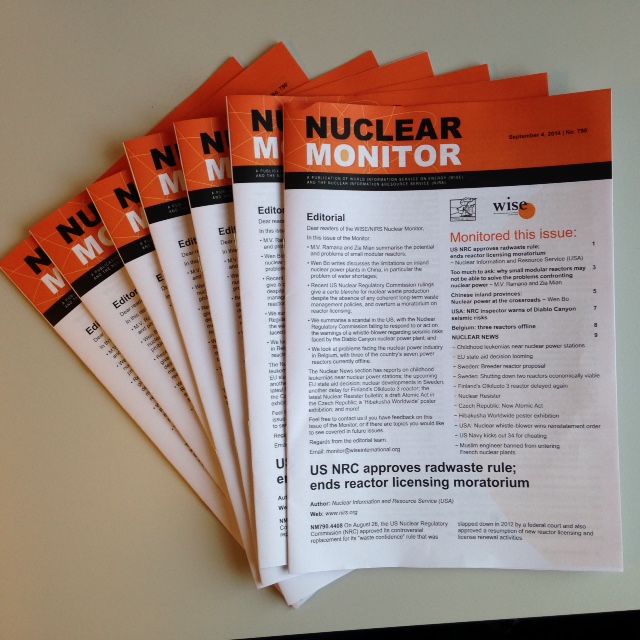 The WISE/NIRS Nuclear Monitor is a unique international newsletter serving the worldwide movement against nuclear power. Produced 20 times per year, it gives an anti-nuclear perspective on what is happening in the nuclear power industry and the resistance against it. The English version of the WISE/NIRS Nuclear Monitor is produced in paper and e-mail versions (PDF format). The newsletter is posted on this website two months after publication - check out our archive. In order to receive it when published, you need to subscribe.

The WISE/NIRS Nuclear Monitor concentrates on grassroots movements and media, featuring articles in which activists all over the world report on their local campaigns. Other articles are written in-house, using information in several languages from news agency, NGO, industry and governmental sources. Quality is the main focus. Experienced NIRS and WISE staff, backed up by one of the world's largest archives on nuclear power check the information in the articles. All the articles we publish mention sources so that others can double-check the information.

The current Nuclear Monitor arose from the merger, in January 2002, of the WISE News Communique, which WISE Amsterdam had produced for over 21 years, and the Nuclear Monitor, published by NIRS in Washington, D.C., U.S.A. NIRS sends the Nuclear Monitor from Washington, D.C. to subscribers in the USA and Canada; WISE internatoional sends them to all other subscribers. The version sent out by NIRS is largely the same as the version sent out from Amsterdam, but occasionally contains more U.S. news.

With a small, committed and highly experienced staff we fight nuclear, everyday and everywhere. Support us!